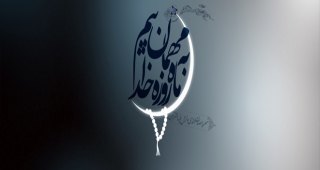 Merits and Nobility of the Holy Month of Ramadan

Holy Prophet (p.b.u.h.) told Jabir Ibne Abdullah Ansari: “O Jabir! This is the month of Ramadan. One who fasts in this month, prays in a part of the night, keeps his stomach and private organs from Haram, protects his tongue from useless talks, will come out of the sins just as the month of Ramadan proceeds.

Jabir said: O Messenger of Allah! What a beautiful tradition this is!

Then the holy Prophet (s.a.) replied, “O Jabir, how difficult it is to act upon these conditions!”

Messenger of Allah (s.a.w.s.) said: “The month of Ramadan is a month whose fasts Allah has made obligatory upon you. Whoever fasts in this month with belief and for seeking its rewards, he will come out of his sins like the day his mother gave him birth.”

Merits of the Holy Month of Ramadan

In the Sermon of Allah’s Messenger (s.a.w.s.)

Sheikh Sadooq (r.a.) has related through reliable chain of narrators from Imam Reda (a.s.) and he narrates from his respected ancestors, who narrate from Amirul Momineen (a.s.) that he said: “One day, the Messenger of Allah (s.a.w.s.) said in a sermon:

“O people! The month of Ramadan is coming with forgiveness and blessings towards you. This is the month which is the best of all months in the eyes of Allah. Its days are best among the days. Its nights are best among the nights. Its hours are best among the hours. This is the month in which you have been invited as a guest of Allah. You have been included among the people of grace. Every breath you take in this month has the reward of Tasbeeh (glorification of Allah), your sleep is worship and your good deeds are rewarded and your invocations are accepted. Therefore, you must invoke your Lord right earnest with hearts that are free from sin and evil, and pray that Allah may bless you to keep fasts, and to recite the Holy Quran.

Verily! The person who does not receive the mercy and benevolence of Allah in this month, is very unfortunate. While fasting, remember the hunger and thirst of tomorrow in Qiyamat (Day of Judgment). Give alms to the poor and needy. Pay respect to elders. Have sympathy to youngsters and be kind towards your relatives and kinsmen. Guard your tongue against unworthy words, and your eyes from sins that are not worth seeing (forbidden) and your ears from sound that should not be heard.

Be kind to orphans so that when your children become orphans, they will also be treated with kindness. Do invoke that Allah may forgive your sins. Do raise your hands at the time of Prayers, as it is the best time for asking for His mercy. When we invoke at such times, we are answered by Him. When we call Him, He responds and when we ask for anything, the Prayer is accepted by Him.

O those whose lives are pawned to their deeds by their own hands. Free them by invoking Allah for forgiveness. If your back is under the load of sins, prostrate yourself before Him for long and make it lighter. Do understand fully well that Allah has promised in the name of His Majesty and Honour that He will not take to task such people who fast and offer prayer in this month, and perform Sajdah and that He will not burn them in the fire of Hell on the day of Judgement.

O people! If anybody amongst you arranges for Iftar (food for ending of fast at sunset) of any believer, Allah will give him reward as if he has set free a slave. He will forgive his minor sins.

Some companions asked, “O Allah’s Messenger! Not all of us have the means to do so”. The Prophet (s.a.w.s.) told them, “Keep yourself away from the fire of Hell, by inviting a believer for Iftar, though it may consist of half a date or simply with water, if you have nothing else.”

O people! Anybody who is in this month may cultivate good manners, will walk over the Sirat (brigde) of the Hereafter and his feet will be firm while all the feet would be slipping.

Whoever offers recommended (Sunnat) prayers in this month, Allah will save him from Hell. In this month, whoever offers one obligatory prayer, the angels will write for him the rewards of seventy such prayers that were offered by him in any other month.

Whoever recites repeatedly Salawat on me, Allah will keep the scales of his deeds heavy, when in Qiyamat the scales of others will be tending to lightness. Whosoever recites in this month only one verse of Quran, he will be rewarded in manner as if he had recited the full Quran at other times.

AmirulMomineen (a.s.) said: “I stood up and asked, “O Allah’s Messenger! What is the best deed in this month?” He said, “O Abal Hasan! The best of all deeds in this month is to keep oneself from that which Allah has made Haram.

Then Allah’s Messenger (p.b.u.h.) wept. I said: “O Allah’s Messenger! What has made you weep?” He said, “I weep for all that will befall in this month upon you. I can foresee you offering prayer for your Lord while the cruellest of all the predecessors and successors has risen to strike on your head, such that your beard has covered with blood. Then I asked: “Will this help in saving my religion?” He said: “It will help in saving your religion!” Then he added: “O Ali! Whoever murders you, has murdered me; whoever envies you, has envied me; this is because you are for me like my soul is to me. Your nature is from my nature; and you are my successor and my vicegerent upon my nation!