Fasting and the Holy Quran
Fasting and Quran
A series of articles by His Eminence Grand Ayatollah Saafi Golpaygani regarding the Holy Month of Ramadan. 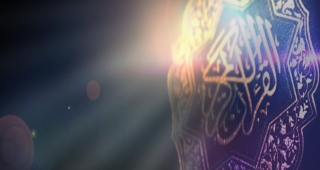 Fasting And The Holy Quran

Quran invites the believers and propagates the command of fasting, and the believers – who have lent their ears to the divine command – for the purpose of obedience, begin to fast from the moment this divine order is issued. The moment they see the moon’s crescent, they free themselves from the chain of their habits with a spiritual leap.

The phrase: (كَمَاكُتِبَ عَلَى الَّذِينَ مِنْ قَبْلِكُمْ…) explains the point that fasting is not a fresh and new obligation to refrain from the edibles, drinkables, physical pleasures and all other things that can break fast. Instead, fasting was an obligation in the past religions and law as well.

This point, which is a special form of divine sympathy, decreases the feeling of difficulty and hardship that one has to face in forsaking the things that can break the fast. From the psychological aspect, it gives strength and endurance to the person who is fasting.

It can be said with courage that: “the way in which it is possible for everyone to obtain reward, attain the desirable moral values and heavenly characteristics, dominate his self, fight his inner lust, achieve will power and nearness of Allah’s threshold, in this month, such opportunity is not available for him at any other time.”

As we shall mention in the following discussion, Allah (s.w.t.) has sent our great Prophet (p.b.u.h.) with a Sharia that is easy and comfortable.

The actual power of human beings is to dominate over their inner-self, lust, anger, and to show steadfastness against difficulties, and to demonstrate patience and endurance.

Binge eating and mere physical nourishment comes with great difficulties and dangers, and it causes the darkness of spirit and blindness of heart and insight.

If physical training, which is given extreme importance in our era, is not considered a stepping-stone for the nourishment and nurturing of one’s soul, thoughts and moral value, then it would remain totally worthless.

We should observe a moderate behavior in everything. Physical training should also be within the moderate limit and everyone should pay attention towards it in order to keep away weakness and incapability from the body and soul. We should not present physical training in the form of an art, profession or job and prevent people from paying attention towards their soul and the duties they are obligated to do in the society.

Islam is the religion of Allah, intellect and logic. Hence, in the cases where nurturing and training the officers and militants who fight and defend the house of Islam and the hometown of Muslims, who maintain peace, and such preparations which are associated with conducting physical competitions; similarly, in the cases which cause the strengthening of the intellectual and creative powers, conducting them and giving gifts in such programs is known to be appropriate.

Nevertheless, the school of ‘fasting’ is where classes are conducted for self-development and are an ascending ladder from which all the Muslims should benefit.

Now, O Muslims and believers! Welcome the holy month of Ramadan and benefit from the vast mercies of Allah (s.w.t.).

We should make sure that the fasting tradition of this month – which is from the great signs of Islam and the depicter of loyalty, steadfastness, equality and compliance of our society towards the religious rules- should be performed with honor and etiquettes in the best possible manner.

Unfortunate is one who deprives himself from the blessings and benefits of fasting without any legal Sharia excuse. And impudent is that belly worshipper who breaks his fast without any legal excuse; or if he has an excuse, he breaks his fast openly, and humiliates the order of Allah (s.w.t.); who disrespects and dishonors the feelings and sentiments of millions of Muslim, and one who does not respect the sanctity of this holy month.

How ungrateful is someone who spend the month of Ramadan by committing sins and crimes, and deprives himself from Allah’s forgiveness. Apart from following the tradition and apparent etiquettes of fasting by forsaking eating and drinking and abstaining all such things that break one’s fast, one should try to habituate his body and body parts to distance them from sins; and we should also purify our thoughts and perceptions from the impure and filthy ideologies and Satanic thinking.

We must try to keep distance from those acts and behavior which do not synchronize with the spiritual, nurturing, physical and other impacts, benefits and motives of fasting.

Refrain from backbiting; do not abuse; do not express immorality; do not utter unsuitable words; do not show lack of patience and endurance; do not go after unchastity, keep away from ogling and looking at non-Mahram; do not harm people with hands or tongue; do not eat Haram; do not express self-glory; have mercy on your subordinates; respect the people younger than you; observe your relationships; support the poor and needy people; visit the sick people and attend them; express modesty and shame.

Recite those supplications which have arrived in this month for different times: dawn, night and day; it is better if we pay attention towards the meaningful topics and messages they carry.

Study and examine your conditions, moral values, methods and behavior. Lest your job and profession be Haram. Assess the inside of your soul and conscience with precision. Try to compensate your past so that you come out of this month in a pure state.

In this month, think a lot about your death, the fate of this world and the material life, about the world after death, the Judgment day, resurrection, questions and assessments; and weep upon the incidents that will occur in future; and whisper the following sentences from the supplication of Abu Hamza:

Then seek forgiveness and return towards Allah. Lest you become hopeless of His Mercy:

(O my Lord! Fulfil my hope, secure me from my fear; because with my excessive sins I have no place to seek refuge except Your pardon)

Whoever you are, and in whichever condition you are, in whichever form you were till today in your life, reforming your work is easy. Your impurities will be washed with the water of repentance, forgiveness and tears in the state of invocation and supplication; and you will become pure and without contamination.

“O my Lord! Bestow Your Mercy upon me when my excuses have failed and when my tongue has ceased to be able to answer to You, and when my intellect has subsided upon Your questioning, So O to whom I submit my utmost hope! Do not disappoint me when my tragedy has intensified”

Indeed, with just a single movement from the dark world of lust and desire, demand of world, mercilessness, oppression etc., fly towards the world filled with light and brightness, virtues and dignity, piety and divine servitude. How much ever you have followed your inner desires, committed sins, disobeyed Allah (s.w.t.), covered yourself with illegitimate lusts, deviated from the path of chastity and purity, chose the path of flattery and undeserving praises, walked on earth with arrogance and pride, oppressed upon the servants of Allah, turn over all this to the divine threshold and weep out of repentance; and take providence for the Hereafter:

Repent before Allah (s.w.t.) and seek pardon and forgiveness from Him:

Refrain from sins and walk towards the forgiving Allah. It is unfortunate if our life, time and the bounties bestowed upon us by Allah is wasted. Come and experience the taste of spiritual benefit, the taste of servitude and divine worship, and the dominance over soul!

Sit on the vast dining cloth of Allah’s hospitality in this month and eat from its food; and place yourself before the breeze of divine Mercy.

Make your eyes familiar with the beautiful voice of Quranic recitation, whisperings with Allah and invocations, instead of listening to musical songs. In one sentence, O my dear brother and sister! Think about your future and fate.

“This is the abode of the Hereafter, which We shall grant to those who do not desire to domineer in the earth nor to cause corruption, and the outcome will be in favour of the Godwary.”[1]