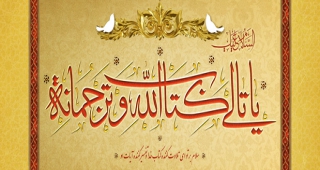 It is reported from Imam Ali (a.s.) that he said: “I heard the holy Prophet (p.b.u.h.) say, ‘seditions will occur soon’! ‘I asked: O Allah’s Messenger! How can a person save himself from these seditions?’

He said: ‘One can save himself from these seditions by means of Allah’s Book, which contains the report of that which existed before you, that which shall come after you and that which lies among you. It is the separator of truth and evil and it is not humorous, playful and wicked. One’s lustful desires will not deviate it and the knowers will not feel content with it; it will not become old by repetitive and excessive recitation; its wonders will not end; whoever avoids it out of arrogance and pride, Allah will shatter him; whoever seeks guidance from anything other than Quran, Allah (s.w.t.) will leave him misguided. It is the firm rope of Allah and the straight path. He who acts upon it will be rewarded, he who commands according to it will command justly and he who invites towards it has invited towards the straight path.”[1]

In the book “Nahj-al-balagha”, it is reported from Imam Ali (a.s.) that he said:

“And know that this Qur’an is an adviser who never deceives, a leader who never misleads and a narrator who never speaks a lie. No one will sit beside this Qur’an but that when he rises he will achieve one addition or one diminution – addition in his guidance or elimination in his (spiritual) blindness. You should also know that no one will need anything after the Qur’an (after the revelation of Quran, one does not need any constitution and program for the reformation of his affairs of sustenance, this world and the hereafter) and no one will be free from want before (guidance from) the Qur’an. Therefore, seek cure from it for your ailments and seek its assistance in your distresses. It contains a cure for the biggest diseases, namely unbelief, hypocrisy, revolt and misguidance”.[2]

We Muslims are of the belief that the Holy Quran is light, mercy and guidance towards salvation and prosperity. It is the most comprehensive book of life that has ever been revealed and a book parallel to it has not arrived and shall not arrive for humanity. The human society does not need any other system or constitution after having the rulings of Quran and the religion of Islam.

Undoubtedly, if the teachings of Quran are applied completely, the flaws and distortions that have occupied the life of human beings will be rectified, thus helping brotherhood and justice prevail in the entire world.

Therefore, our duty is to hold fast the holy Quran and the Prophet’s household (pb.u.h.), in obedience with the following Mutawatir (successive)Hadith:

“Indeed I am leaving among you two precious (weighty) things, the Book of Allah and my family, my household; as long as you hold fast the two, you will not go astray ever”.[3]

It is also our duty to deliver the message of Quran to the entire humanity. The teachings of Quran should be regarded as the cause and motive of all the movements and uprisings, initiatives and reformatory revolutions and we should continuously regard it as the beginning and ending point of our lives, as the spring of guidance and the cause of progress. We must only refer to the holy Quran and the holy Progeny (p.b.u.t.) in all the aspects and dimensions of our life. We must regard it as the only barometer, the unique constitution and law that should compulsorily be followed throughout the world and under no case or circumstance, should we become ignorant towards it.

It is obvious that Muslims cannot distance themselves from Quran in their life, society, religion and world, then claim that religion is separate from world and spirituality is aloof of politics.

The responsibility which we Muslims have to take is that we shouldn’t surrender before the lifestyle of dissociating ourselves from the world. However, many of us have accepted this separation unknowingly and ignorantly.Every Muslim must have an answer to the following questions: