Message of Grand Ayatollah Saafi Golpayegani to the millions of pilgrims, commemorating the Arba’een of Imam Husain (A.S.) 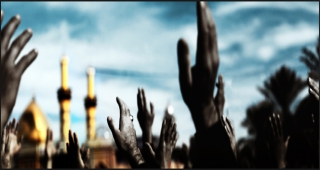 In the name of Allah, the Merciful, the Compassionate

“Indeed, those who have said, "Our Lord is Allah" and then remained on a right course - the angels will descend upon them, [saying], Do not fear and do not grieve but receive good tidings of Paradise, which you were promised.”

O great nation of Iraq; O faithful, brave and loyal people towards Ahlul Bait (A.S.), may peace, blessings and honor be upon you;

By welcoming the martyrdom, you are proving your existence, identity and immortality to the world, and you are introducing Karbala as a unique exhibition of faith, resistance, dedication and courage to the world, and you have despaired the enemies of Islam and made the friends hopeful; I salute you.

Arba’een of Imam Husain (A.S.) is a manifestation of glory, honor and stability of a Qur’anic nation, a nation which fights against oppression, a nation which strongly condemns ignorance, exploitation and contempt. You, with your brave and courageous presence on the day of Arba’een of Imam Husain (A.S.), protect the truth, faith and conscience of humanity, and propagate the global mission of the leader of the martyrs Imam Husain (A.S.) to the world. You crush the selfish rulers and foreign agents and raise your voices against the Yazid and Ibn Ziad of your time.

Indeed! You are performing your Wilayi and Islamic duties in the best possible manner. When you go to Karbala on foot, angels spread their wings in your path. I wish I had this pleasure of walking on foot alongside you chanting the slogan of “Labbaik Ya Husain”, I would have made the dust of your feet the kohl of my eyes.  Congratulations to you.

Presence of millions of pilgrims, from near and far, who pave their way on foot towards the place of martyrdom of leader of martyrs and the freemen of Imam Husain (A.S.), marks it as a great congress of lovers of ‘Ashoora, and it proclaims that the name, the purpose and the path of Husain (A.S.) is eternal and till the end of the world, it will never be forgotten. And the martyrs of this path will attain great honor to themselves, and God willingly, they will be resurrected with their master and leader, Imam Husain (A.S.).

Peace be upon you, O supporters of Islam, Qur’an and Imam Husain (A.S.).