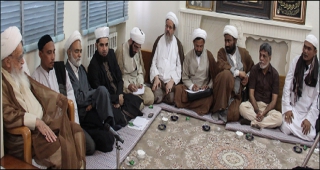 Today, Tuesday 1st of June 2016, a group Sunni scholars and theologians visited the residence of Grand Ayatollah Saafi Golpayegani (May Allah prolong his life) and met with his Excellency.

In a meeting that took place in a friendly atmosphere, Grand Ayatollah expressed his happiness and while pointing that the aim of every Muslim should be the grandeur of Islam, he said: “This gathering has brought me happiness and joy. It gives immense pleasure to a person when he witnesses such gathering where people from different parts of the world come together and at the same time they all are Muslims, religious, believers in Holy Qur’an and Prophet Mohammad (peace be upon Him and His Progeny). Whether they are Shia or Sunni, Unity and cooperation of Muslims with each other is the sign that they all have one aim and ambition, which is to give Islam the respect and grandeur it deserves.”

Ayatollah Saafi, while reciting a few verses of a poem written to praise Prophet Mohammad (peace be upon Him and His Progeny), added to his statement: “If you look at the poetries of great Muslim and non – Muslim scholars and learned men, each one of them has written poetries to praise the Holy Prophet (peace be upon Him and His Progeny), and has consider his holiness as the leader and commander of all and that everyone should try to follow his footsteps.”

While referring towards the magnificence of the holy Qur’an and the invitation of this divine book towards unity and harmony, and clinging with the rope of Almighty Allah, Grand Ayatollah Saafi said: “not just the Christians but also those who were unbelievers and infidels, have written great poetries to praise the grandeur of Holy Qur’an and have drawn attention of every Muslim towards this Holy Verse of Qur’an “Hold on firmly together to the rope of God, and be not divided among yourselves” in which people are invited towards sympathy, cooperation and holding on to the rope of Almighty Allah. This Verse is today’s message of Qur’an to every Muslim that he should have faith in Almighty Allah, in Qur’an and Holy Prophet of Islam; and every Muslim should come together and unite against the enemies, and should try to restore the respect and grandeur of Islam.

His Excellency Ayatollah Saafi, continuing his statement and pointing towards the insurrection of DAESH (ISIS) and calling it a propaganda to defame the real Islam, said: “the enemies we are facing today, it is necessary that we should come even closer, and have more cooperation and understanding with each other to intact our pride and greatness.

Today, the terrorist group of DAESH (ISIS), who have become the reason of defamation of the peaceful image of Islam and Muslims, have seriously created problems for Muslims. The religion which came to promote peace and harmony, and support the oppressed have now became a reason of terror and hatred due to the inhumane acts of DAESH (ISIS). Hopefully, with unity and cooperation of all Muslims, this enemy of Islam will also reach its consequence, God willingly.

At the end of this meeting, Grand Ayatollah Saafi Golpayegani, prayed to Almighty Allah for the success and prosperity of all the scholars and attendees, and also for the magnificence and grandeur of Islam and Muslims around the world.