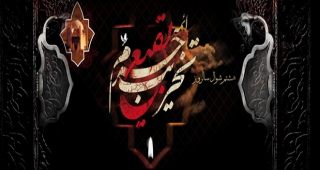 A MAJOR TREASON FOR THE DESTRUCTION OF ISLAMIC HISTORY

THE INTERNATIONAL DAY OF BAQEE’

From more than fourteen centuries until today, Baqee’ has continued to be a religious sanctuary for Muslims, a centre of awareness and a memorial of the great Islamic personalities.

Anger of Muslim Majority upon the humiliation of Islamic History

In spite of all the greatness this holy place holds, its present condition is extremely disdainful, and the humiliation of the men and great personalities that are buried in this graveyard is extremely unfortunate and painful.

Apart from a group of people known as the Wahhabis, who constitute merely a minority of Muslims and have come into existence with the support of the colonist powers like Britain, and a group of people who are unaware of the realities behind the incidents and the interference of politics in the affairs which propagate deceitful advertisements, a vast majority of Muslims is extremely saddened and hurt by this disgraceful and humiliating act.

The graves of ancestors and great personalities are not humiliated and disrespected anywhere in the entire world, and wherever the tradition of burying the dead exists, their graves and cemeteries are also highly respected.

Beginning of a treacherous plot

The foundation of the plot for demolishing the Islamic sanctuaries and memorials was an extremely deep and treacherous one, which was laid by the enemies to eradicate the proofs, evidences and traces of Islamic history. When they were trying to gain dominance over Islamic countries by division and sectarianism, like Ali Mohammad Shirazi and Husain Ali Noori were chosen in Iran with the claims of Babism, Mehdavism, Prophet-hood and even divinity; in India, Ghulam Ahmad Qadiyani brought the Ahmadiyah sect into being; in the Arabia, they created the Wahhabi sect and made Mohammad bin Wahab their agent. Their most important motive, apart from looting the oil resources, was to destroy the traces of Islam, which also included the holy shrine of Prophet Mohammad (peace be upon him and his progeny).

With the help of the efforts and endeavour of the archaeologists that began some time ago and continues to reach excellence day by day, another significant source of history and recognition of nations has been added. Even though this source was a topic of discussion even in the past, but it did not have the current depth and extensiveness. In our era, one of the most significant sources of history and recognition of the conditions of nations and tribes, is the traces and monuments left behind them, which are discovered even by excavations; buildings, places of worship, graves, coins, vessels, jewelleries, works of art etc. are considered to be one of the greatest references of civilizations and the social circumstances of nations today.

Fortunately, the Islamic history is extremely reliable and authentic from its historical aspect on the basis of narrations and traditions. From the beginning of Islamic era itself, the recording of history, narrations of Hadith and quoting of different incidents had begun, and the events and happening have been registered and recorded. Such vast gaps which cause the negligence of history have not occurred in the history of Islam. Similarly, such incidences have not taken place which could result in the deletion of historical books and the creation of a vacuum. The journey of Islamic history is evident and known from all the aspects. Historical inferences and deductions are completely reliable and authentic on the basis of the studies done on historical records and narrations. Inarguably, the part of our history which is, for instance, related to one century ago, is totally relevant with that part which is related to thirteen or fourteen centuries ago. It has no difference in its certainty and firmness. At times, the second section is more reliable and its documentation in more authentic than the first one. In short, the scholars and specialist people can gain cognition of the social circumstances, and of the realities and incidents which have laid an impact on the fate of this nation, by means of these historical records. Truthfully, if we wish to write down the history of this current century, we cannot go beyond the boundaries of the historical writings of the Islamic historians.

Even from the aspect of confirmations, external and original evidences, and the remaining traces of incidents, the Islamic history is extremely rich, wholesome and possesses very firm proofs. With this respect also, how much ever a person might be a late believer, and does not wish to deny a few realities, out of his own intentions, or create doubts and scepticism, in the history of Islam, especially those sections which are related to the introduction of the basis of prophethood, the incident of reappearance, the Islamic revolution, the biography of Allah’s Messenger (peace be upon him and his progeny) and other significant issues, any kind of doubt and scepticism is not acceptable and not worthy of paying attention.

Although the history of Islam and Muslims is the most authentic history among all the religions and human societies, or rather, according to some historians, the only religion which has a reliable and authentic history is Islam. From the perspective of these historic evidences and confirmations, whose protection is especially important for the distant future, this religion is extremely rich and filled with external and original evidences. It means that all the important areas of Islamic history and Muslims are confirmed and approved by the shrines, sanctuaries, monuments, graves, mosques and the geographical condition of countries and territories. In the widespread territories of the Islamic world, we can witness the traces of Muslim civilization and their victories everywhere. Even in the countries like Spain which, after the Golden Islamic Era, faced such an unfortunate fate due to the mercilessness and barbarianism of Christians, and such tribunals of inspections, torture, group executions, and other atrocities, the traces of Islamic civilization are presented before the world today also. If you go through the books such as “Al Aasar al-Andalusia al-Baqiya”, you can get to the depth of this issue to some extent. A great portion of the enormous Spanish budget is guaranteed by the income earned through the tourists and travellers from all over the world who visit this country to witness the monuments of Islamic era.

Due to the aspect explained above, Mecca and Medina hold more importance and significance than any other place. The traces and monuments of these two cities and their surroundings are the sources and origin of not only our history but the history of all the Abrahamic religions. Apart from the spiritual and religious aspects, it would not be exaggeration to regard these two cities as the great Museums of the Islamic world and revelation.

Before the series of demolitions done by the Wahhabis, these two cities had such monuments whose nooks and corners told the stories of great Islamic prophet’s history, and the invaluable traces of his life history and the endeavours of his holiness in the path of preaching the revelation and the message of Islam.

Such monuments which were all a part of the series of authentic Islamic history and the past of the two holy sanctuaries, and which introduced the chain of Prophet’s lineage, and even reported the circumstances of the era of ignorance.

In short, the entire mosque of Medina, the holy Mosque of Mecca, the city of Medina and Mecca, with all their lands, houses, mosques and even springs, wells, roads, mountains, and the lands and cities situated in the outskirts and surroundings of these two cities, all speak of the Islamic history, its emergence and the complete journey. Those Muslims who have the desire to protect their history and dignity, as well as their glorious past, and who wish to revive the traces of Islam, must all strive to protect these monuments and reconstruct all that has been destroyed, and rescue the two holy cities from the embezzlements of the colonists and their destructive occupation.

These remnants, signs and monuments, can give a better understanding of the life of holy Prophet (peace be upon him and his progeny), than the biographical books.

The biographical books are accessed only by the ones who are capable of studying them, whereas these monuments can be witness by all the people who come to visit from near and faraway places, and they can learn great lessons from them.

In my opinion, even the original names of all the places and lands, which were mentioned at the time of Prophet and in the traditions, must be protected; and specially, the names which were specially allotted for the Prophet’s Mosque, Masjid-al-Haram, its gates, pillars, and all the other things associated with it, must not be changed, for all these are the memorials of Islamic history. Those who have done these destructions, have committed the greatest acts of treachery and hostility towards the history of Islam.

The protection of these sanctuaries, apart from the aspect of venerating the sacraments of Allah which is incumbent as per the Sharia, it is also obligatory because of the points mentioned above. The demolition of these landmarks, apart from degradation and humiliation, will shake and weaken the bases of Islamic history. The loss of demolishing these shrines and keeping them in such a form that they not even have tombstones, or any other sign of recognition, and leaving them on the verge of destruction and eradication, is nothing less than the loss of burning the books of history for a nation.

Our collective duty on the International Day of Baqee’

The eighth day of Shawwal is the day when the destruction committed by a misguided group began from Baqee’, where they demolished the holy shrines of Ahl-al-Bait (peace be upon them), and attacked the identity of Islam. Therefore, it is obligatory on all the Muslims, irrespective of Shias, Sunni and other sects, to condemn their atrocities on this day, and collectively demand the reconstruction of these holy shrines for the revival of Islam’s lost glory. This sorrowful day must be commemorated by the Muslims every year and the oppressors must be condemned. These monuments must be renovated as soon as possible, especially the sanctuaries and shrines like the birthplace of Prophet Mohammad (peace be upon him and his holy progeny) in Mecca, and the burial place of his grandfather, his dear uncle, and his self-sacrificing wife. The locality of Bani Hashim must also be reconstructed.

Especially the Shias must commemorate this day in the memory of the historical incident and the disrespect shown towards the household of Prophet (peace be upon him and his progeny) in the two holy sanctuaries, which continues even today. They must conduct Majalis for mourning over this sorrowful tragedy and give their condolences to the leader of the time, Imam Mahdi (may Allah hasten his reappearance), and condemn the oppression committed against Islam, Quran, the holy Prophet and his household (peace be upon them). They must not forget this tragic incident because it is not forgettable.

“They desire to put out the light of Allah with their mouths, but Allah will perfect His light though the faithless should be averse”.[1]