Reviver of the Sharia – The Truthful Imam 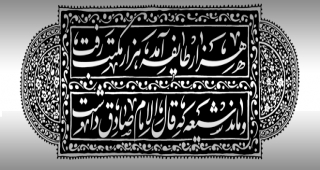 Reviver of the Sharia – The Truthful Imam

His holiness Al-Sadiq (peace be upon Him), the rightful Imam

Leader and commander of the religious people

Revived the Sharia of his grandfather, Al-Mustafa (s.a.w.s.)

Glorified the custom and religion of Love

Opened the institution of Jurisprudence and virtue

Invited men through a new beginning

His holiness, Imam Jafar al-Sadiq (peace be upon Him), with his comprehensive and extremely virtuous and knowledgeable personality, is someone to whom the entire Islamic world is indebted, for the directions and teachings of his holiness remain in ample and abundant quantity throughout the scientific and Islamic fields. In the fields of theology, theosophy, monotheism, ethics, jurisprudence, religious rulings, Qur’anic commentary, and all the other sciences which are studied in Islam, the works of Imam Al-Sadiq (peace be upon Him) have an extraordinary luminosity and illumination not just among the Shia community but the entire Islamic world.

Ibn e Uqdah penned a book in which he mentioned the names of 4000 students of Imam Jafar al-Sadiq (peace be upon Him), who narrated from His Holiness concerning different sciences. He has quoted the narrations of every single one of them in his book. In other scientific fields, such as today’s neo-sciences, like Physics and Chemistry, his highness has trained students who were extraordinary in their fields, like Jabir bin Hayyan, whose books when translated in Europe, got him the title of “the father of Chemistry”. He has written five hundred to one thousand books on various subjects and quoted Imam Sadiq (peace be upon Him) throughout his writings. He was a person who possessed the knowledge and awareness of extraordinary sciences and was a student among thousands of other students of Imam Sadiq (peace be upon Him). His holiness had students in other fields also, such as the field of Anatomy. The book “Tauheed e Mufaddal”, whose translation is now available, must be studied by everyone to understand the kind of sciences his holiness (peace be upon Him) has introduced for us at that time.

For several branches of jurisprudence, we have just one narration from Imam Sadiq (peace be upon Him) upon which we have based all its rulings. In fact, it is the narrations of his holiness through which our jurisprudence and Islamic rulings have reached us.

Najashi narrates from Ahmad bin Eisa Ash’ari that he said: “I went to Kufa seeking the science of Hadith, and reached the service of Hasan bin Ali al-Washa. I asked him: Give me the book of Alaa bin Zareen and Abaan bin Othman Al-Ahmar so that I can duplicate its text. He gave me both the books. I said: Give me permission to narrate. He said: May Allah have mercy on you. Don’t be in such haste. Take it with you and write it down. Then bring it back to me and read it before me. Only then will I permit you to narrate.

I said: I do not feel secure due to the circumstances of the time.

Hasan bin Washa said: Strange! If I knew that Hadith had such seekers and its demand was so high, I would have gathered more than what I have. I met 900 Sheikhs in the Kufa Mosque and each one of them said: “I report from Jafar bin Mohammed…”

Late Sheikh Sadooq (r.a.) and Sheikh Tusi (r.a.) have respectively narrated a detailed Hadith by their own chain of authenticity from Sudayr Sairafi in which the grieving and mourning of Imam Sadiq (peace be upon Him) upon the occultation of Imam Mahdi (May Allah hasten his reappearance) has been mentioned. To observe brevity, we will mention only a section of this Hadith.

Sudayr Sairafi says: Mufaddal bin Umar, Abu Baseer, Aban bin Taghlib and I visited his holiness, Imam Sadiq (peace be upon Him). We witnessed that his holiness was sitting on the ground wearing a dress stitched from hair, ruffed and open-collared, and was weeping like a father aggrieved on the death of his son. The signs of sadness and grief were apparent on his face. His eyes were filled with tears, and he was saying:

“O, my master! Your occultation (separation) has deprived me of my sleep and narrowed my rest-place. It has taken away my relief and relaxation. O, my master! Your occultation has turned my sorrows into an eternally painful one. The deprivation of one after the other will destroy the group and numbers. Just when I feel that a teardrop has dried in my eye and my grief has rested in my chest, a greater and heartrending sorrow and a more dreadful and obscure circumstance personifies in front of my eyes”.

Sudayr said: We lost our mind and our heart began to tear into pieces upon witnessing such a terrifying and frightening incident. We assumed that this weeping and wailing are due to a seriously unbearable and dreadful event, or he has suffered a great tragedy.

We said: O son of the noblest man! May Allah prevent your eyes from weeping! Which tragedy has made you weep and filled your eyes with tears? What has occurred that you are so deeply aggrieved?

His holiness took a deep sigh which increased his grief and said: “Woe unto you, I looked into the book of “Jafr” today morning. It is the book in which the knowledge of deaths, afflictions and that which has occurred and will occur till the day of Judgment is registered, and is specifically given by Allah (s.w.t.) to His Prophet, Mohammad (peace be upon him and his progeny) and the Imams who succeeded him. I contemplated upon the issues of the birth of our Hidden one, his occultation, his lengthy life, and upon the sufferings that the believers will bear in his time, and the doubts that will arise in their hearts due to his long period of occultation, and that their majority will turn back from the religion, and forsake the religion of Islam (till the end of the Hadith)”.

The Greatest Institute and University

What a great Madrasa and university it was? What great knowledge and sciences they possessed? The passage of time has proved the importance of the repetitive reminders of Prophet Mohammad (peace be upon him): “I remind you all of Allah for my Household” or “Do not teach them for they are more learned than you”.

The holy Prophet (peace be upon him and his progeny) did not praise them because they were his relatives and belonged to his family, but it was because of the position, knowledge, and status which they held.

Ibn e Ayash, one of the great scholars of the fourth century, has written a book named “Moqtadhab-ul-Asar fin Nas alal A’immatil Ithna Ashar”. Fifty years ago, I saw a copy of this book but it wasn’t published properly. I decided to get it published again and in order to make sure that this book was a work of that time, I studied all its sources and references and went through all those books which quoted from this book later on. I wrote a preface on the book in which I quoted the word of Shibrawi, the former head of Al Azhar University, regarding the greatness of the knowledge of the Prophet’s household. Sheikh Abdullah Al-Shibrawi has a book named “Al Ithaf bi hubbil Ashraaf” written on the virtues of the Sadaat (the lineage of Prophet). In that book, he quotes the words of some scholars who say: “Whoever refuses to accept the virtues of Prophet’s household, is like someone who wishes to hide the sunlight. Not anyone has asked them a question which they failed to answer”.

We must understand the preciousness of this Holy Household and the value of the teachings and directions that have reached us from them. Moreover, we must propagate these teachings in the entire world so that all those who are thirsty for these sciences can drink from this unparalleled ocean of cognition and knowledge.