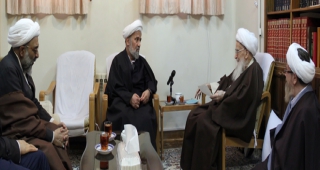 On Wednesday Morning, 14th Jamadi Al-Thaniya, 1440 Hijri (1st Isfand, 1397), a group of people from the organization that is about to conduct a seminar on Ayatollah Haj Agha Murtaza Hairi (r.a.), met with Grand Ayatollah Saafi Golpaygani at his house and benefitted from the recommendations of his eminence. In the beginning of this meeting, the head of the organization presented a report on the programs and activities that will be held in this seminar.

His eminence acknowledged their efforts and expressed his gratitude towards them. He said that the commemoration of such a great jurisprudent is like the revival of the religion and its good values.

An Excerpt from the message of His Eminence is as follows:

In the name of Allah, the All-Beneficent, the All-Merciful.

With regards and greetings for the honorable guests, I express my heartfelt respect and reverence for the high-ranked Jurisprudent Late Ayatollah Haj Agha Murtaza Hairi (r.a.). The program that you wish to conduct, as well as other programs which will be held in the coming future, are immensely important and significant. The remembrance of such great clerics and scholars must continue eternally so that people shall benefit from their lives, works and way of living. I hope that the programs you intend to organize are held in the best possible manner.

A personality like that of Ayatollah Haj Agha Murtaza Hairi (Allah’s abundant mercy be upon him) is a source of pride for the entire community. We have great affection for him from a very long time and have spent a long time together in the past. I myself and my late brother, Ayatollah Haj Agha Ali Saafi (r.a.), as well as our honorable father (may Allah shower His mercy upon them), shared an age old history with him, whose details shall consume a long time if mentioned.

On one journey, when we had the opportunity to visit the holy city of Qom with our late father (r.a.), Ayatollah Agha Hairi (r.a.) insisted that we visit his house and be his guests. And when Grand Ayatollah Late Haj Agha Sheikh Abdul Karim Hairi (r.a.), the founder of Qom’s religious seminary, passed away, then after a few days, Ayatollah Murtaza Hairi (r.a.), in order to help his children come out of the state of tragedy and affliction, went to Gulpaygan with Late Imam Khomeini (r.a.) and visited the house of my late father (r.a.).

We have shared a great time with his late brother Haj Agha Mahdi (r.a.) also and when we used to attend the classes of Grand Ayatollah Late Agha Sayyid Mohammad Taqi Khwansari (r.a.), we used to have group study together. Late Haj Agha Mahdi (r.a.) was also very intelligent and creative. In short, we had a great history with the house of Ayatollah Hairi (r.a.) from a long time and it continues till today.

From the intellectual and knowledge-related aspect also, Ayatollah Haj Agha Murtaza (r.a.) was extraordinary and praiseworthy. His writings are beneficial for the students even today. From the aspects of his lifestyle, piety, God-wariness, and other spiritual methods followed by him, he had a glorious precedence.  We did not know of anyone who had such high spirits. May Allah (s.w.t.) bless his soul! His etiquettes and humbleness was uncommon. He led his life with utmost simplicity and it shouldn’t be deemed exaggeration if we say that he did not pay any attention to the world.

From the aspects of social affairs and public service, as well as helping the weak and deprived classes of the society, he took significant steps among which are the charitable institutions that were established on his command whose positive impacts can be felt even today and numerous people benefit from it.

From the aspect of devotion towards the holy Progeny (peace be upon them), his life is exemplar. Look at the holy visits he made to the sacred Shrine of Imam Reza (a.s.) in Mashhad during those difficult circumstances and conditions. Similarly, he used to conduct mourning programs inside the holy Mosque of Imam Hasan Askari (a.s.), if the entire detail of those events are noted, it will certainly be worth learning.

Regular visits of Late Agha Hairi (r.a.) to the holy mosque of Jamkaran are also notable. I remember that on one journey, I and my brother, went walking with him to the holy Mosque of Jamkaran and after offering prayers inside the mosque, we visited the house of Late Grand Ayatollah Hujjat (r.a.), which was a very simple house in Jamkaran.

Among the other dimensions of his personality, was the vast experience he had in Amr bil Ma’roof (invitation towards good deeds) and Nah’y an Al-Munkar (prohibition of bad deeds). I still remember the day when the parliamentarians of the former Regime attempted to distort and alter the Islamic history. That same morning, when the radio announced that a session has taken place in which the history has been altered, upon hearing it, I stood up in anger and along with my late brother, went to the house of Late Agha Hairi (r.a.). There we decided to send telegraphs in objection to the treacherous act committed. I and my late brother took the action. Late Agha Hairi (r.a.) also sent a letter in which he objected on this act. Nevertheless, the piety and God-wariness of his eminence did not stop him from taking actions in such matters and did not restrict him from objecting and agitating, and from the implementation of Nah’y an Al-Munkar.

In the Council of Experts of the constitution, of which we were both members, when he took the decision of not attending the sessions any further, he said before leaving, ‘I cannot attend these sessions any further but my opinion will be the same as the opinion of Agha Saafi and I agree to his statements”.

Nevertheless, how much ever said about this great personality is less. The remembrance of this great jurisprudent and his outstanding history of services for the community will prove to be a source of learning for the upcoming clerics and students, especially in today’s time when we must know that our seniors have left no stone unturned on the path of Amr bil Ma’roof and Nah’y an Al-Munkar.

May Allah bless each one of you with the opportunity to make the people aware that the path of these honorable men is the right path,; especially in today’s time, the most important issue is Amr bil Ma’roof and Nah’y an Al-Munkar, and the eradication of corruption and dishonesties that exist in the Islamic society. The statements that are made against Islam and its values such as Hijab, are all condemnable and incorrect. Those who do not say anything and remain silent against these corruptions will certainly be answerable in the divine threshold of Allah (s.w.t.). Our women must look at the history of Muslim women in the case of Hijab.

As the poet said: “Every Muslim woman must cover herself with veil because Hijab is a sign of faith”.

Muslim women used to cover their faces with veil and some clerics considered the covering of face as obligatory. These things are important. The seminar that is going to be held must accomplish these goals. It must serve as a cause of revival for Amr bil Maroof and Nah’y an Al-Munkar – which was the way of our senior clerics and jurisprudents.

Once again, I humbly express my gratitude to all you honorable men who have decided to commemorate the life of such a great personality. You must know that honoring Late Agha Hairi (r.a.) is like reviving the religion and its good values. May Allah grant you success and place you under the special attention and blessings of the Master of time, Imam Mahdi (May Allah hasten his reappearance).