His Holiness Imam Musa bin Jafar (peace be upon him)
A Special Article on the Occasion of the Martyrdom of Imam Musa Al-Kazim (a.s.) 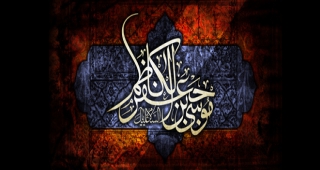 The name of His Holiness is Musa and his titles are Abd As-Salih, Aalim and Bab Al-Hawaij. The most famous title of His Holiness is Kazim and his nickname is Abul Hasan, the First. He lived for about fifty four years. He was born on the 7th of Safar in the year 128 Hijri and was poisoned by Sindi bin Shahik on the 25th of Rajab, 183 Hijri, by the order of Harun Al-Rashid (may Allah curse him), which is how he attained the sublime status of martyrdom.

Peace be upon you, O my master Musa the son of Ja’far. Allah’s mercy and blessings be upon you. I bear witness that you are verily the guiding leader and the guardian who leads to the right guidance, you are verily the core of the Revelation, the man of true interpretation, the bearer of the Torah and the Gospel, the knowledgeable, the decent, the veracious, and the one who puts his knowledge in practice. O my master, I repudiate your enemies in the presence of Allah and I seek nearness to Allah through loyalty to you. So, may Allah bless you, your fathers, your forefathers, your descendants, your partisans, and your devotees. May Allah’s mercy and blessing be upon them.

Supplication of Imam Kazim (peace be upon him)

O my God, all sounds are submissive to You, all intellects are too short to recognize You [as exactly as You are], all things are fearful of You, all things plea to You, all things are too tiny in comparison with You, and Your light fills all things. Therefore, You are the Exalted in Your Majesty, You are the Luminous in Your splendor, You are the Great in Your Omnipotence, and You are Whom nothing can tire. O He who sends down my bounties! O He who relieves my agonies! O He who settles my needs! [Please] Give answer to my Request, and in the name of ‘there is no God save You’. I believe in You and I am sincere to You in obedience. I begin my day keeping my covenant and promise to You as much as I can. I confess of Your favour to me and I beseech You to forgive my sins that none else can forgive. O He who is nigh in His sublimity, Sublime in His nearness, Brilliant in His glow, and Powerful in His [absolute] authority! (Please) send blessings upon Mohammad and his Household.

Lessons from the life of Imam Kazim (peace be upon him)

Short Sayings of Imam Kazim (peace be upon him).

Prayer of Imam Kazim (peace be upon him)

The prayer of Imam Kazim (peace be upon him) consists of two units (Rak’ats) and in every unit, one must recite Chapter Al-Hamd once and Chapter Tawheed twelve times.

Anecdote: Son of the Prophet

When Harun Al-Rashid arrived the city of Madina for the Ziyarat of Holy Prophet’s (peace be upon him and his progeny) grave, a group of people had accompanied him. Harun stood in front of them and said proudly: “Peace be upon you O Messenger of Allah, Peace be upon you O my uncle’s son”.

Harun’s face color changed upon hearing this and signs of anger were evident from his face.

When Harun Al-Rashid (may Allah send His wrath upon him) decided to assassinate Imam Musa bin Jafar (peace be upon him), he suggested each and every commander and governor of his empire to take charge of this act, but none of them agreed to commit this heinous crime. He wrote a letter to his representatives who were in the foreign lands to send a few people for him who do not know any God or His Apostle. He said that he wants to perform this assassination by their medium.

His representatives sent 50 people who were unaware of Islam and Arabic language. Upon their arrival, Harun welcomed them warmly and honored them immensely. Then he asked: Who is your god and who is your prophet? They said: We do not have a god and do not recognize any prophet. Then, he sent them to the house where Imam (peace be upon him) was imprisoned and asked them to murder him. Harun was witnessing the scene from the room’s window. Just when their eyes fell on Imam, they dropped their weapons; their bodies began to shiver and they went into prostration and started weeping on the state of Imam.

Imam Musa bin Jafar (peace be upon him) moved his hand on their heads and spoke to them in their language, and they kept weeping.

When Harun witnessed this incident, he felt that a revolt might take place; so he shouted loudly and called his deputy asking him to take out all those people from the room. They came out but with such respect and honor for Imam that they did not turn their backs towards him. After coming out, they mounted their rides and without the permission of the ruler, went back to their homes.