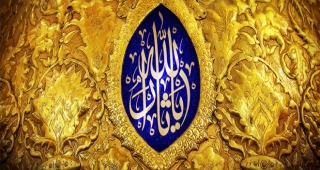 Although the unparalleled sacrifice, perseverance, truth-worship, trust, will-power, disregard of the deceiving beauties and luxuries of this world, breaking of associations and worldly attachments, expressed in the tragic incident of Karbala have manifested the existence of Imam Husain (peace be upon him) and attracted the hearts towards him to such an extent that less attention is paid towards other virtues of his holiness.

It is as though the social thoughts and human intellects consider a person who depicts sacrifice and selflessness in the path of supporting the truth, as someone who possesses all the greatness and virtues, and how much ever the level of sacrifice rises and gets purified, the greatness of one’s personality in the hearts of people increases.

The unparalleled sacrifice of Imam Husain (peace be upon him) has elevated his status so high that in every field of comparison and competition, he can compete with every man with great ethical and moral values through this single virtue only.

It is true that the depiction of such persistence, bravery, fortitude and magnanimity is not possible by anyone but who is outstanding and prominent in other ethical values and etiquettes also. Faith and wisdom, certainty and insight, trust and reliance on Allah (s.w.t.), piety and endurance, must all be present at the highest level in a person so that he can become the manifestation of such astonishing and magnanimous signs and the epitome of abstinence, forbearance and steadfastness.

However, it is not easy to indicate towards the virtues and excellence of such a great personality but for the sake of blessings, we will briefly indicate towards some of the ethical values of His Holiness:

How much more we focus on the life of the Master of Martyrs (peace be upon him), this secret becomes even more apparent for us that in the case of religion, a miraculous insight and an unseen vision has guided His Holiness throughout the path.

The knowledge and wisdom of His Holiness becomes apparent through the debates and arguments he has had with the enemies of the holy Household, specifically Muawiyah and Marwan, through the letters he wrote to Muawiyah, through the sermons he delivered on different occasions and through the supplication of Arafa, and other supplications which are narrated from His Holiness in the books of both Shias and Sunnis.

Ibn e Kathir has written in his book Al-Bidayah wan Nihaya: Husain (peace be upon him) and Ibn e Zubair left for Mecca and took shelter in the holy city. Husain (peace be upon him) became the centre of attention for the people of Mecca. They used to visit him, sit near him and listen to his words and speeches, and benefitted from what they heard from him. They used to record his words in their memory and wrote them down so that they can narrate them for others.[1]

Alaili has written in his book Sumuw Al-Ma’na: People were so devoted and attracted to the spirituality and greatness of Imam Husain’s (peace be upon him) soul and Imam Husain (peace be upon him) was loved by them so much that they used to leave all their works and quit all their engagements to come hastily towards him. There was none other than Husain (peace be upon him) who had so many devotees and lovers; as though people witnessed a different reality of divinity and spirituality in him. When Husain (peace be upon him) used to speak, it felt that a tongue that knows the unseen is speaking, and giving them awareness about the secrets and hidden realities of the world and when he became silent, his silence made them aware of realities and truth in a different manner; because a portion of realities cannot be made apparent but with deep silence; like the dots and gaps which are placed between words, sentences and phrases, and those mere dots, like the words written on a book, give such meanings which cannot be understood without those dots even with the help of any other word or writing.[2]

The abovementioned incidents clearly depict an undeniable truth about the extent to which Imam Husain (peace be upon him) is loved by the people. Even though people where under extreme pressure by the government and their actions were supervised by the spies and agents of the government who kept an eye on them everywhere so that no one can maintain contacts with Imam Husain (peace be upon him), but is it possible to disconnect people from themselves, from their hearts and conscience by using force or dominating through powerful means? Power, to whichever extent it might be, cannot dominate over the human understanding and forces, how much ever influence they might have, cannot influence the inner-self and spirituality of human beings.

The reports that have been narrated from Imam Husain (peace be upon him) convey his knowledge and elegance, his intelligence, potential and inborn disposition, and the strength of his speech. Such narrations are more than what one can reckon. In the case of knowledge-related affairs, he used such intelligence and wisdom and answered with such ability that left people astonished to such an extent that Abdullah bin Umar said about him: “He is filled with knowledge”.[3]

Just like a hen feeds its chicks with its beak, similarly Imam Husain (peace be upon him) had received knowledge in the house of Apostleship and Guardianship directly from the Holy Prophet (peace be upon him and his progeny) and wisdom from the chest of Islamic teachings.

From Humility to Dignity

How much ever the understanding, divine cognition, monotheism, knowledge and wisdom of a man increases, his humility and humbleness increases simultaneously. The arrogance of a person is rooted in his ignorance, unawareness, negligence and selfishness. In the holy verses and narrations, arrogance is immensely denounced whereas humbleness and humility is highly praised.

Imam Husain (peace be upon him) used to live among the people and never accepted separation from them. His life was filled with simplicity. He used to walk for the holy pilgrimage every year, sat with the common people and visited their houses frequently. He used to interact with the poor, attend the congregational prayers, visit the sick, went for the funeral rites of the people and conversed with his friends and companions inside his grandfather’s mosque. He used to accept the invitation of the poor and invited them to his house as guests. He himself carried food and bread for the needy, the downtrodden, the widows and the orphans.

Ibn Abdul Barr and Ibn Atheer narrate from Mus’ab Al-Zubairi that he said: Husain (peace be upon him) was highly virtuous and remained attached with the religion. He offered numerous prayers, fasting and pilgrimages[4]. Abdullah bin Zubair said while describing his prayers: Husain (peace be upon him) remained awake in the night for prayers and kept fasts during the day.

He used to offer thousand units of prayers in one day and walked for the holy pilgrimage (Hajj) twenty five times[5]. This is an evidence of his excellence in servitude and humility towards the divine threshold of Allah (s.w.t.). On one of those days, he held the pillar of Kabah and was supplicating and expressing his servitude and humility in the divine threshold by praising and exalting Allah (s.w.t.) in the following manner:

If one wishes to know the way of supplication, servitude and humility of this oppressed Imam in the divine threshold of Allah (s.w.t.), it is sufficient for him to refer to the supplication of Arafah.

Imam Husain (peace be upon him), is the son of that same father and the inheritor of his qualities. More than anyone else, it was he who felt the most pain and became immensely angry when the rulers of the Umayyad dynasty and their agents committed atrocities upon the people. His uprising was an uprising against oppression, tyranny and atrocities, and his movement was a movement which delivered the oppressed and the deprived.

One of the incidents which stands witness to the intensity with which Imam Husain (peace be upon him) supported the oppressed and defended the deprived, is the incident of Arainab, the daughter of Ishaq and the wife of Abdullah bin Sallam. Yazid, who was the successor and heir of Muawiyah and one who had wealth, position, power, beautiful maids, female dancers and self-purchasing singers in his control, in spite of all this, had his lustful eyes on a married woman, whose chastity and honor should have been protected by him and his father Muawiah.

Like rowdies and lustful people who are brought up in a vicious and sinful atmosphere, Yazid became restless for her but since that woman was a decent, chaste and innocent one, he could not have access to her even by means of deceiving and deviating her with ways of piety. Muawiyah, the filthy and indecent ruler who made the people call him the Commander of the faithful, in order to fulfill the lustful and sinful desires of his son Yazid, tried to design an unprecedented and astonishing plot. He separated that unfortunate husband from his decent and beautiful wife and thus arranged the modes of fulfilling the desires of his son with that woman.

However, Imam Husain (peace be upon him) stood with bravery and zeal against this wicked and satanic decision of Muawiyah and caused the failure of his wicked plot. Husain (peace be upon him) depicted the Hashemite zeal and honor, and his own interest in securing the sanctity of Muslims, by preventing Yazid from fulfilling his filthy and impure desires. The separation that was created by Muawiyah’s wickedness turned into a connection and His Holiness prevented a great atrocity from being committed on Abdullah bin Salam and his wife. This incident is registered eternally as a praiseworthy and virtuous one in the history of Imam Ali’s (peace be upon him) dynasty whereas it is counted among the oppressions and atrocities of the Umayyad dynasty.[8]

Guardian of the Deprived

Imam Husain (peace be upon him) offered his prayer and came out. He witnessed a poor Bedouin, went back and called Qumbar.

Qumbar said: At your service, O son of Allah’s Messenger.

His holiness said: How much money is left with us for the expenditure?

He said: Two hundred dirham, which you told me to distribute among the members of the household.

He said: Bring it to me! Someone who needs this money more than us has arrived. Then he took that money, came out and gave it to the Bedouin.[9]

One day, His Holiness went to meet Usama bin Zaida at his house. Usama was crying and expressing his sorrow.

Imam asked: Brother, why are you sad?

He said: I have taken a loan of six hundred dirhams.

Imam Husain (peace be upon him) said: Your debts are on me.

Usama said: I fear that I might die without my debts being paid.

Imam said: You will not die until I pay all your debts.

His Holiness paid all his debts before his death.[10]

[3] Alaili, Sumuw Al-Ma’ni, p. 148. Similar to these words was said by Yazid for His Holiness Imam Zain Al-Abideen (peace be upon him); when he was suggested to accept the request of His Holiness, and allow him to ascend the pulpit, Yazid (l.a.) did not give the permission and said: If he ascends the pulpit, he will definitely put us to shame. The told him: What can this young man do in this condition? He said: You are not aware of this household,

[8] There is some difference in some of the sources with regard to some of the specific details of this incident, like the names of a few people. That which is mentioned by us briefly, is in accordance with the narration of Shabravi in Al-Ithaf (p. 201-210) and Ibn Qutaybah Dinwari in Al-Imamah wal Siyasah (v. 1, p. 166-173). Refer to: Alaili, Sumuw Al-Ma’ni, p. 156-159.