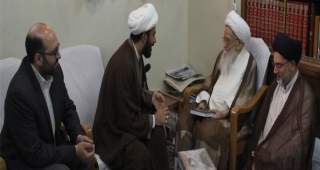 With respect to the publishing and distribution of doubts and skepticisms regarding the movement of Karbala in Arabic language within different countries, he expressed that it served as a reminder to them of an absence of a comprehensive book in this filed and added, ‘After the researches done by the academic committee of the Holy Shrine and the institute, it was concluded  that the book “Shaheed e Aagah” was among the best books written in response to those doubts from both the intellectual and literary aspects with its elegant and simple language, and about one year ago, the translation of this book was commenced by a group of expert translators.

Praise be to Allah, as a result of the relentless efforts and hard work of the institute’s researchers, we felt proud that in the holy month of Ramadan and on the auspicious occasion of the birth anniversary of Imam Hasan Al-Mujtaba (peace be upon him), we got the opportunity to present this precious book for the honorable researchers and scholars.

As the meeting continued, His Eminence expressed his heartfelt gratitude to Sheikh Al-Tamimi and his colleagues and said, ‘I feel extremely proud that my book became blessed with the name of the holy and sacred shrine of Imam Husain (peace be upon him) and I consider this a great divine opportunity for myself.’

At another instance of his speech, Grand Ayatollah said, ‘I hope that the efforts put in by the Holy Shrine of Imam Husain (a.s.) and the Warith Al-Anbiya institute, for the purpose of reviving the cause of the holy household (peace be upon them) becomes a source of pleasure for His Holiness Imam Mahdi (may Allah hasten his reappearance).’