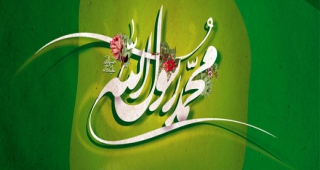 And His Path Rescued the Humanity

To talk about a great and elevated personality on who both Muslims and non-Muslims have written thousands of books, sermons, articles, eulogies, and thesis, and one who has gifted mankind the most sublime teachings and culture and the most human of all the social, political, moral and economic teachings, is unethical. What can we possibly say or write that could explain any excellence among the great excellences of that divinely chosen man? Hence, we do not have any option but to bow down with humility and apologize for what we have said or are saying about him.

Nevertheless, if we even say something, it is not as though a particle of dust is praising the luminous sun or a drop that is praising the glory of the oceans, because if compared to his sun-like existence and the ocean of his virtues and excellences, we are much lesser than a dust particle or drop. Instead, it is to obtain some reward through this means and also for enjoying the reminiscence of his holiness, and enlightening our conscience with it, and reviving our souls. Therefore, to obtain success, we do not hesitate in taking his name, and reciting Salawaaat on him, and praising and eulogizing him at every opportunity and event.

Scholars, writers, and poets from every religion and sect have unanimously praised this champion of virtue and have rubbed their foreheads out of humility in front of the divine threshold of His Holiness. Here, we would present some examples from the seamless ocean:

One of the non-Arab poets who has written a eulogy praising the greatness of Prophet Mohammad al-Mustafa (peace be upon him and his progeny) was Surosh Isfahani, whose nickname is Shams al-Shu’ara, in his compilation of poetry:

And the Arab poets have also praised His Holiness and written numerous eulogies and poems regarding his endless virtues. For example, the Arab poet Ahmad Al-Shauqi said in one of his poems:

These are examples of those poems that were written in the praise and exaltation of His Holiness, Seal of the Prophets, but whatever we say or other confess to, is nowhere near the sublime words of the Qur’an:

“Allah certainly favored the faithful when He raised up among them an apostle from among themselves to recite to them His signs and to purify them and teach them the Book and wisdom, and earlier they had indeed been in manifest error.”

We can truly not speak about the personality of His Holiness, Allah’s Messenger (peace be upon him). Mankind becomes astonished. Even those who are very lofty become astonished.

“Allah sent Muhammad (SAAW) as a warner (against vice) for all the worlds and a trustee of His revelation, while you people of Arabia were following the worst religion, and you resided among rough stones and venomous serpents. You drank dirty water and ate filthy food. You shed blood of each other and cared not for relationship. Idols are fixed among you and sins are clinging to you”.

Or in another instance from Nahj al-Bagaha, he said: “I also testify that Muhammad is His slave and His Prophet whom He deputed when the signs of guidance were obliterated and the ways of religion were desolate. So, he threw open the truth, gave advice to the people, guided them towards righteousness, and ordered them to be moderate. May Allah bless him and his descendants”.

And how beautifully that materialistic man, Shibli Shamil, has praised him in his eulogy for His Holiness:

All the great men of this world and the champions from the past, present, and future, their rank, position, and personality is lower than the sublime position of Mohammad (peace be upon him and his progeny).

Certainly, it is the truth that among all the great champions of history, the one who is rightfully the master of all virtues and Islamic values is Mohammad, and the one who is more successful, more virtuous, and highly distinguished among all the receivers of heavenly messages, or in the words of “Thomas Carlyle”, the champion in the form of an apostle, is Mohammad (peace be upon him and his progeny).

Another moderate Christian and scholar, praised His Holiness in his eulogy, by saying:

“I am a Christian and I exalt Mohammad, and I consider him the exordium of the book of elevation and loftiness of position.

George Bernard Shaw says, ‘Mohammad must be called the deliverer of humanity. I believe that if a person like him takes the responsibility of leading the new world, he will definitely be able to successfully solve the difficulties and problems of the current world in a way that all the people of the world will live together in prosperity, peace, and harmony. Mohammad is the most perfect among all the human beings from the past and the contemporary world, and one cannot imagine someone like him even in the future”. According to a report of the journal “Life”, published in England, it was the same man who said: “The greatest and most important of all religious teachings is the principle of helping humanity, which propels mankind towards a better life. Any religion which does not have such a principle and thought must be abandoned”.

It was the same person who explained the reasons why Islam and only Islam is the religion that can provide the instruments through which human beings can obtain their actual goal. He said, ‘If a human being is one who must rightfully become the manifestation of God, then he must move forward in light of Islamic teachings…Islam has always had enough strength and has protected its basis and foundation, and it is the same till today, and will remain the same in future.’ Bernard Shaw said furthermore that: How much ever the world progresses and mankind elevates to the peak of wisdom and philosophy, the religion of Islam will remain ahead”.

Towards the end of this article, it has come in detail: “Bernard Shaw believes that the world in general, and England in specific, must choose Islam or a similar law or teaching system, for deliverance, and incline towards it willfully or otherwise.

Among the foreign scholars and learned men, there are many who like Bernard Shaw researched these truths and confirmed them.

It is evident that after all these confessions and speeches about this great personality of the human world, the Muslims must highly acknowledge the efforts, guidance, and directions of His Holiness.

Hopefully, in today’s time, the aware and devoted Muslims, especially the young generation, will deliver the message of Islam to the world and join together all the regions with its luminous guidance and rebuild the golden ages of faith and action with fresh commitment.

1. This poetry has been published in the book Al-Shauqiyat of Ahmad al-Shauqi, from Dar al-Shuruq, Egypt.