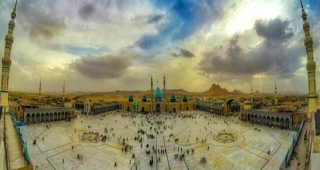 The contemporary world is the world of advancement in arts and industries, the world of communications, the world of information regarding molecules and the material creatures that are smaller than molecules till the greatest of existing planets, in a space whose extensiveness and dimensions have been discovered by human beings up to millions of light-years, the world in which every small or big part, every visible and invisible existent, every human being and animal, every tree and tree-leaf, and every bud and fruit, and every stone and pebble, and every mountain and mine, and ocean, sea, and river, and every aquatic, flying, and terrestrial living thing is itself a great world that consists of its own characteristics, wonders, and numerous signs. It is a world whose actual description is not possible for the human writers, and whose infinite and boundless numbers and alphabets and words, which constitute the book of creation and the formative book, are described by the Powerful and All-Knowing Creator in this manner:

The Contemporary World and The Unsolvable Problems of Humanity

In the contemporary world, when humans have solved a lot of age-old problems and numerous issues which had remained unsolved for a long time, with the help of the power of knowledge, research, and their god-gifted potential, and on the other hand, they have also invented many dangerous weapons of mass killing and destruction, but instead of increasing the peace of mind, relaxation of heart, and satisfaction towards future and a desire for the continuation of life, eternity, and survival, these sublime emotions became weaker inside them, and it appears that they are nearing a downfall. Instead of creating a brighter and stronger light of hope in his inward self, it is inclining towards extinguishment.

The disappointing pictures of life, and the great machinery of the material schools of thought, and the human being himself, and all the countless signs and indications and secrets that exist inside him, have depicted everything to be meaningless and valueless, and human society has been made to confront the danger of heedlessness and lack of inclination shown by the youths and future generations towards life. This purpose has been aided by the injustices, oppression, atrocities, and exploitations committed by the strong and big governments, who are termed as the superpowers. Also, their political and economic games, and the existence of a great section of society below the poverty line, and the different kinds of pressures, and the billions of dollars spent for the sake of weapons, and tens and hundreds of other such factors, have served this purpose.

Especially, they disappoint human beings from trusting such systems which are based on spirituality and eventually drive the young generation towards the consumption of drugs and other illegal activities. These poisonous advertisements are done by the newspapers, magazines, radios, and televisions, and all the programs that are broadcasted through them, strengthen this disappointment and hopelessness, and intoxicate the human intelligence, and portray the human virtues and excellences, their feelings of kindness, affection, and justice as valueless and insignificant.

Despite all the industrial advancements and all the understandings that are apparently available for us, the hope of mankind towards life and inward peace has reduced and is facing a sharp decline. Its proof is his act of seeking refuge in addictions and intoxicating substances, which threaten the future generation more severely than AIDS.

Peace and satisfaction under the shadow of divine religions

One of the greatest distinctive virtues of the divine religions is the peace and satisfaction which they create inside the hearts, and make everyone hopeful of a better and more advanced future.

Islam has propagated this quality at the topmost level and made mankind hopeful for the future, by eradicating the factors of hopelessness and disappointment from his life, and by giving the correct explanation for human life, and all the afflictions and pains that human beings have to deal with in their life. It depicts all these things as a milestone for elevation, progress, and excellence. The soulful and soothing voice of the Holy Qur’an in the verses such as: “Do not despair of the mercy of Allah”[2], and “Do not despair of Allah’s mercy”[3], create a sense of happiness, hopefulness, foresight, and steadfastness in human beings. And it is the Qur’an and the guidance of the Qur’an in a verse like: “Warfare has been prescribed for you, though it is repulsive to you. Yet it may be that you dislike something, which is good for you, and it may be that you love something, which is bad for you, and Allah knows and you do not know”[4], that gives so much spiritual strength to the humans that they walk forward in extremely dangerous situations and show readiness to face extreme difficulties. To return the value of today’s human being, we must return him towards the religion, the divine teachings, and the guidance of the Qur’an.

Good tidings for the arrival of the age of establishment of Universal Justice.

As you all know, one of the hope-giving prophesies made by all the divine religions, or rather, all other religions are also in agreement with it, is the good tidings regarding the time when universal justice will be established and a single government will be formed for everyone.

It is a government that was prophesied by the heavenly books such as Torah, Bible, Psalms, and the Holy Qur’an (the greatest, everlasting, and eternal evidence of the apostleship of all the prophets), and whose good tidings and hope was given to all the humans. It is a governance that gives meaning to hundreds of Qur’anic verses and the verses like “Indeed ease accompanies hardship. Indeed ease accompanies hardship”[6], “And we desired to show favor to those who were abased in the land and to make them imams, and to make them the heirs”[7], “Allah has promised those of you who have faith and do righteous deeds that He will surely make them successors in the earth, just as He made those who were before them successors, and He will surely establish for them their religion which He has approved for them, and that He will surely change their state to security after their fear, while they worship Me, not ascribing any partners to Me. Whoever is ungrateful after that – it is they who are the transgressors”[8], declare it as certain and definite. We all must be hopeful for the future and must await that time and era in which the truth and justice will be fully established, and we must act for it, and consider our lives and all the lives of all human beings as devoted to those great purposes and valuable goals. This faith, indicating which is the verse “Who believe in the Unseen”[9], is extremely sublime, strengthening, propelling, and increasing the efforts and endeavors.

The likes of this verse: “Certainly We wrote in the Psalms, after the Torah: ‘Indeed My righteous servants shall inherit the earth’[10], among the verses of Qur’an, which are all light and cure, have their own luminosity, and they warn us that in any condition and every circumstance, how much ever the wrongdoers and the oppressors dominate us, it is not permissible for us to retreat and forsake the barricades of sincerity, effort, and action. Weakness, laziness, and hopelessness do not have any place in the dictionary of anticipation and hope.

The likes of this tradition, ‘If no more than a single day remains from this world, surely Allah (SWT) will elongate that day to such an extent that he raises in it a man from my nation and from my household, whose the name will resemble my name, and he will fill the world with justice and fairness, the same way it would be filled with oppression and tyranny,’[11] which fully emphasizes the factor of hopefulness for mankind and declares that the future shall be certain and definite in occurrence. Such traditions must always remain in the sight of the active human beings, the fighters, the valiant humans, and the advanced humans.

Mankind has welcomed the school of anticipation

Among all those meaningful and attractive words, articles, thesis, and books that have been written for the guidance of human beings, for strengthening their spirits and giving them resistance against the hardships, and for providing steadfastness, stability, and firmness, those words which have been penned regarding this luminous future and about the unparalleled the divine personality of His holiness, which attracts the hearts towards him, have a special manifestation and attraction. When everyone finds themselves hopeless and finds all the doors of relief and hope to be shut, and do not find any support for themselves, they all wish to hear about him and reminisce those days of freedom and salvation. They will read these books, turn their pages, weep, moan and cry ‘Al-Ghauth’ (Help), ‘Al-Aman’ (Peace).

They will show special devotion towards those places and areas which are associated with that beloved of God. Among the poetries, those poems which increase their love, desire, and hope, are more warmly welcomed. The lesson and teachings that they acquire from such poems increase their happiness and hope. This ideology must be propagated among all the human beings, among the women, the men, the youth, the aged, among everyone. We must make everyone hopeful so that the culture of anticipation becomes common and universal, and the roots of despair, hopelessness, suicide, heedlessness, and the backward journey, with laziness, indulgence with toxic substances, playfulness, and forbidden acts, become dry.

We all must know and believe that darkness will alleviate. As per the order of “Allah is intent on perfecting His light”[12], the light of Islam, the light of faith, the light of justice, and the light of knowledge and cognition will be perfected and it will embrace the entire world. It has arrived in the noble narrations that: “Anticipating the Relief (Faraj) is among the best of deeds”[13]. “The greatest Jihad of my nation is to anticipate the relief (Faraj)”[14]. This anticipation is full of hope. It brings power, life, joy, and the love for Jihad. It does not carry lethargy, silence, depression, weakness, laziness, helplessness, and slackness. It is an action performed for Allah, for the elevation of the word of Allah, for the good and relief of the servants of Allah, and the journey towards Allah (SWT).

Today, our society, our youth, all of us, need to gain acquaintance with this institute and having an affinity with this divine school. We must perfect our cognition of the Imam of the time and the Guardian of the Age, day by day. The Holy Prophet (peace be upon him and his progeny) said: “Whoever dies without the cognition of the Imam of his time, will die the death of ignorance”[15]. And it has arrived in another narration: “He shall die, if he wills, as a Jew, and if he wills, as a Christian.”

This emphasis is extremely cautionary. We must know the Imam of our time. We must read the verses and traditions that are related to His Holiness, and present them with explanations and elucidations through pulpits, in our speeches, and in our writings.

We must have awareness about the occultation of His Holiness, the special features of the age of occultation, the trials, and programs that are awaiting us, and the purification and refinement that will occur. We must have acquaintance with the objectives of His Holiness as much as possible, by seeking benefit from the hundreds of books that have been written before his birth until today.