The Morning of Ashura 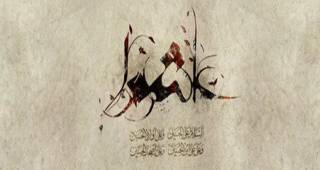 In the name of Allah, the Almighty.

The Morning of Ashura

Peace be upon you O Aba Abdillah Al-Husain!‏

The morning of the day of Ashura is the morning of a great day of resurrection when mankind stood on the most terrifying stations and the most horrific positions, and faced such incidents that left even the celestial angels in astonishment.

It is a difficult and frightening morning, that is followed by such incidents and that carries such trials for mankind that are so brittle that being unbreakable against such hardships is nothing but a manifestation of the impossible and the unthinkable. If such difficulties had fallen upon the skies, the earth, and the mountains, they would not be able to bear it, and if a person carried the collective power of the entire humanity, even then it would be strange and astonishing to bear the hardships and afflictions of such a day.

In the history of humanity, this day was welcomed by only one person. It did not have a precedent in the past and it will not occur in the future. One person, who is apparently a single being, but from the sight of meaning and insight, he is a world and worlds of spirituality and personality, and much more than the heavens and the earth, the paradise and all that it contains. He is the true and most perfect example of the phrase “The human face is the greatest of all the arguments sent by Allah for His creatures and it is a book written by Him with His own hands, and it is a structure that He constructed with His wisdom…”. He was a great man who stood on that day and in that field, which was filled with all that is perceived by everyone as terrifying, horrific, and unbearable.

It is the Morning of the Day of Ashura. The Morning which is filled with severe afflictions that are to be welcomed by Husain (peace be upon him) and his household, and his companions, and they have to defend the religion, the Qur’an, and the dignity of the Progeny of Mohammad (peace be upon them) and the dignity of all the dignified human beings, and they have to pursue, with honor and glory, the unique path which cannot be pursued by even the most elite people throughout centuries.

It is the morning of Ashura, a huge army of tyranny and anti-humanity, an army that has arrived for performing the biggest of all crimes, and who came to siege a small and apparently little group, but one that consisted of the elites of the world. With certain decisions and firm determination, Husain (peace be upon him) and his companions announced their existence for the entire world and all the people who came in the future and the angels and everyone. Allahu Akbar! What a greatness of belief and virtuousness of motive and goal.

Although the entire existence of Husain (peace be upon him) was full of exclusive attention towards the Almighty God, and despite knowing that in that battle, the enemies will commit all kinds of atrocities, neither he and nor his companions accepted defeat. They made their enemies felt helpless with their high spirits and strength of faith in Allah throughout his way and the straight path of sacrifice in the way of the religion and warmly welcomed martyrdom.

Despite all that, this monotheist man and the special and sincere servant of God considers everything and all the powers from Him and knows Him alone as the Living and Ever-lasting being, therefore he seeks Allah with the complete invocation and announces his trust and reliance in God. He prays and supplicates in such a manner that words and expressions are incapable of describing that condition of desire, ecstasy, and attention of Husain (as) and his companions towards Allah (SWT).

Husain (peace be upon him) witnessed on that day something which is apparently beloved for a person and for the protection of which everyone supplicates, in certain danger. He supplicates but his supplication is not for the apparent deliverance from this abyss and great trial. He did not pray that O Lord! Save my young ones and my brothers from this killing and martyrdom, and save my household from captivity, and keep them and my companions alive, or make these wicked men have mercy on my infant, no! He did not supplicate in this manner and none of his companions and supporters supplicated in this style.

All of them were only thinking about martyrdom. They were happy that they were among the supporters of God, the supporters of the Messenger of God, and the supporters of truth. That which never came across their mind was deliverance from death. They had all drowned in the ocean of attention towards God and attainment of the success of martyrdom. Their prayer was to become as sincere and successful in the path of martyrdom and giving away lives in the way of Allah as possible. They wished to be more sacrificing and more desiring in their stand against the strikes of arrows, swords, and spikes of the enemies. Being killed in the path of God and attaining martyrdom is a great success which they were witnessing with their eyes, and with utmost desire and interest, they were moving towards it.

The supplication of Husain (peace be upon him) on this day is a supplication that depicts the peak of the spiritual flight of His Holiness and explains his special and sincere connection with Allah (SWT). The great lessons that can be learned from this supplication and this situation are very constructive and significant. It is the highest level of their connection and proximity to Allah (SWT). A man whose entire existence is the meaning of “Indeed my prayer and my worship, my life, and my death are for the sake of Allah, the Lord of all the worlds”.

O, Allah! You are my confidante in every sorrow and You are my hope in every hardship and You are my source of trust and my treasure in every affair that descends upon me! There are so many extreme sorrows that make the heart weak and reduce the solutions, and that makes all the near and far incapable of help, and over which the enemies gloat, and during which the actions make me drudge, I have brought those affairs in Your threshold and complained to you regarding them and turned myself away from anyone other than You, so you solved them for me and removed them and You were sufficient for me. You are the guardian of every bounty and the Master of every need and the ultimate goal of every desire.

In this supplication, whose monotheistic phrases and the connection with the sublime truths and lofty meanings should be explained by the senior clerics and the people of cognition. It is the proof of the power of faith and the reliance, trust, and hope of the Imam (peace be upon him) in God. Indications have been made towards great points in this supplication.

First: Monotheism in the position of reliance, trust, and confidence, Imam (peace be upon him) during miseries knows only Allah (SWT) as his support and source of reliance, and does not trust and rely on anyone except Allah (SWT).

Second: Monotheism in the position of hope and anticipation. In this position and level also, all his hopes are attached to Him and His best judgment during difficulties and hardships.

Third: He praises Allah (SWT) in every condition that He has alleviated all his miseries and sorrows, pains and agonies, and removed all those issues that weaken the heart and shut the path to a solution, and when a friend leaves his friend alone, and over which the enemy gloats.

In this position and during these terrible circumstances also, He beseeches Allah (SWT) to grant him the power of safeguarding that position and to help him endure all the afflictions and trials so that he himself, along with his household and companions, can cover the entire distance, all the stages, and elevated levels, with undeterrable determination, and leave behind all the frightening gorges of this valley with eagerness and desire, and go ahead, moving on and on, until they reach a place whose height cannot be reached by our intellects and hence, they conquer all the peaks of virtue.

This supplication and this medium of trust and reliance were accepted in the best form and Husain (peace be upon him) reached the place he wished and desired. All his goals were achieved and all his true desires and demands were fulfilled. All his friends and companions conquered the sublime peaks of proximity to Allah (SWT) and the blessings of their action shall keep blooming and remain alive and permanent till the Day of Judgment. They became the referents of the holy verse: “Allah has drawn a parable; a good word is like a good tree: its roots are steady and its branches are in the sky” throughout the centuries and periods until the day of Resurrection.