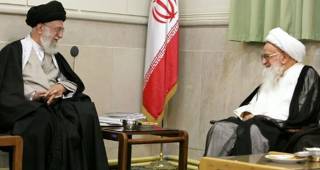 In the Name of Allah, the All-Beneficent, the All-Merciful

It is with deep regret that I received the news of the demise of the grand jurisprudent and insightful Marja’, Ayatollah Haj Sheikh Lotfullah Saafi Golpaygani.

He was one of the pillars of the Qom seminary and among the most distinguished figures in knowledge and practice. He was also the most experienced religious scholar in that blessed seminary.

For many years, he was a central figure in the Guardian Council and after that he would continuously get involved in matters regarding the Revolution and the country by taking a caring, responsible approach toward the issues. Many times he informed me of his views and recommendations.

His poetic talent, memory of history and concern about social issues are among some of the other characteristics of this long-lived, magnanimous scholar. His demise is a source of grief for the religious, scientific community of the country.

I express my condolences to his esteemed family, his honorable children, the Grand Marja’ and scholars of the Qom Seminary and to his followers and admirers in the Qom Province and city of Golpaygan. I ask God to bestow His forgiveness and mercy on him.