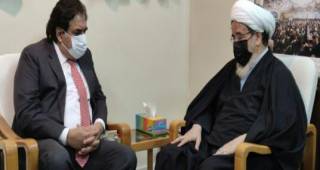 The Ambassador of the Islamic Republic of Pakistan to Iran conveyed a message of condolence to the government and people of this country.

In this meeting, the Ambassador of Pakistan praised the Islamic stands taken by the Grand Ayatollah Safi Golpaygani during his lifetime, calling him a symbol of a divine figure.

Referring to the special attention of the supreme jurist to international issues and the situation in the Islamic world, he considered that great authority as compassionate and concerned about the Muslims and the oppressed of the world.

In the continuation of this meeting, Hujjat al-Islam wa al-Muslimeen Al-Haj Sheikh Mohammad Hassan Safi Golpaygani, while appreciating and thanking his presence and the accompanying delegation to offer condolences for the loss of Grand Ayatollah Safi (may Allah elevate his rank), pointed out that the Grand Ayatollah always paid special attention towards the oppressed people and Muslims of Pakistan, and said: By following the affairs and daily news of Islamic countries, especially neighboring countries such as Pakistan, he was aware of the events and the situation there, and wherever it was necessary to speak in defense of the oppressed and Muslims, he did not hesitate in issuing a statement or warning the officials.

In another part of his statement, the Dars Kharij teacher of the seminary of Qom called the interest of the late Grand Ayatollah in the Pakistani people and scholars superfluous and added: Grand Ayatollah Safi (ra) had a special interest in the dear people of Pakistan and the scholars of that country and always praised their religious zeal and insistence on preserving their Islamic identity.

Hujjat al-Islam wal-Muslimeen Safi Golpaygani, referring to the existence of many scholars in Pakistan, said: The late Ayatollah, my honorable father (may Allah be pleased with him) read many books authored by the scholars, clergymen, and poets of Pakistan, and recited the epic poems of Dr. Mohammad Iqbal, at different occasions, from his memory.

In the end, he thanked the attendees of the meeting and prayed to God Almighty for the honor and progress of Muslims around the world in the shadow of the Quran and the Ahl al-Bayt (as).