Message of Grand Ayatollah Saafi regarding current situation of Yemen 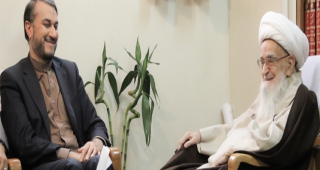 He presented a report on the current situation in the region and the incidents of Saudi Arabia’s violation in Yemen at the commencement of the meeting.

His Excellency thanked him and regarding the proceedings of the Foreign Ministry he said: the important events that have occurred in the region, should be scrutinized carefully, and appropriate course of actions should be taken with high precision and contemplation.

His Excellency in regard to the events occurring in Yemen and the aggression of Saudi Arabia on the innocent and defenseless people of Yemen said: Why is the international communities and especially the UN staying neutral over the killing of innocent people in Yemen and why instead of defending the oppressed, this organization -which has the duty to protect the innocent and defenseless- issues resolutions against them, which in fact lets the tyrant’s to continue their crimes?

The Grand Ayatollah Saafi Golpaygani continued his remarks, adding that: Rulers of Saudi Arabia should know that this criminal aggression will end with good note for them, and they will be held accountable for all the killings and lootings.

The innocent people – children and women, young and old – were been massacred by the hands of oppressors, shouldn’t the Arab countries and the Muslim world defend them?

Fortunately, until now this Ministry has undertaken good steps and shall continue this path and the State’s diplomatic authorities should prioritizes the cooperation with the regional countries and the Islamic world.

Grand Ayatollah in the end prayed for the defenseless and oppressed people of Yemen and the region for their victory, and prayed to Almighty Allah for the destruction and the end of the enemies of Islam. He also prayed for the success of State’s Ministry of Foreign Affair’s authorities to serve Islam and the Islamic nation.