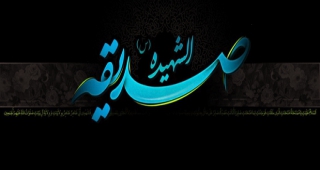 The Lady of Greatness and Piety

In the name of Allah, the All-beneficent the All-merciful.

“Allah (swt) said: Indeed Allah desires to repel all impurity from you, O people of the Household, and purify you with a thorough purification.”

Allah’s Messenger (peace be upon him and his household) said, ‘What befell the children of Israel will befall my Ummah, step by step, such that if there was one who entered a lizard’s hole, you will also enter.’

The gatherings that are organized for educating the people with the realities of the school of Ahl Al-Bait (peace be upon them), especially of Lady Fatima Zahra (sa), are extremely celestial and our tongues are incapable of describing their worth and value.

At the beginning of the discussion, I would like to express my heartfelt condolences to the holy threshold of our Master, Imam Mahdi (may the souls of all the worlds be sacrificed for him), and to all the Shias, on the martyrdom anniversary of Lady Zahra (peace be upon her). I hope that we all shall benefit from the blessings of these invocations and the veneration of the sacraments.

How much ever we wish to write about the virtues of Lady Zahra (peace be upon her) and the different dimensions of her life, we cannot reach the end of discussion even if our lives reach their end in this world.

The holy existence of Allah’s Messenger (peace be upon him and his household), her majesty’s father, also desired to introduce her to everyone from the present and future, but the conditions and circumstances of that time, and the lack of potential in the people, did not let all the truths of Lady Zahra’s (sa) existence be made apparent.

As much as Allah’s Messenger (peace be upon him and his progeny) introduced her, depicts her lofty and divine position. The famous tradition “Indeed Fatima is part of me, that which harms her harms me”, which is reported in different words and styles and at various instances from the holy Prophet (peace be upon him and his household) in the books of Shias and Sunnis, depicts the extremely elevated status and lofty position of Her Highness. Once upon a time, I had studied all the five volumes of the book Al-Nihayah of Ibn Athir, and I came across several traditions in which the author mentioned Ahl Al-Bayt (peace be upon them), and I noted some of them, like: “Fatima is a part of me, that which makes her laugh makes me laugh”, or “Fatima is a gift of light”, or “Fatima is a Hilya of me, whatever makes her angry, makes me angry”. In fact, many other traditions have also been reported, that too from the Prophet (peace be upon him and his progeny) whose words are certified by the verses “He does not speak out of [his own] desire: it is just a revelation that is revealed [to him]”.

The chosen status regarding which Allah (swt) speaks refers to Lady Maryam (sa) “And when the angels said, ‘O Mary, Allah has chosen you and purified you, and He has chosen you above the world’s women’ is extremely significant. In many instances in the Holy Qur’an, the chosen status of a few noblemen has been mentioned. A small book named “Al-Safwa” has analyzed all such verses, like ‘Then We made those whom We chose from Our servants, heirs to the Book’, ‘Indeed Allah chose Adam and Noah, and the progeny of Abraham and the progeny of Imran above all the nations’. These verses depict that this chosen status has precedence in the nations that arrived before the nation of the Holy Prophet (peace be upon him and his progeny). Upon studying these verses and carefully analyzing the tradition reported from His Holiness Prophet Mohammad (peace be upon him and his progeny), wherein he said ‘‘What befell the children of Israel will befall my Ummah, step by step, such that if there was one who entered a lizard’s hole, you will also enter’, it can be understood that the chosen status exists in the nation of the Prophet (peace be upon him and his progeny) also, and there are such people who possess that status.

One of them, in the true meaning of the term and with the approval of the Holy Qur’an, is when Allah (swt) said, ‘Indeed Allah desires to repel all impurity from you, O People of the Household, and purify you with a thorough purification.’

The importance of Lady Zahra’s Sermon

Look at the sermon delivered by Lady Zahra (sa) in an extempore manner in the mosque of the Prophet (peace be upon him and his household), at a time when nobody dared to speak due to the suffocating circumstances.

Why was Lady Zahra (peace be upon her) named Batul

Another point that can be mentioned with reference to the virtues of Lady Zahra (peace be upon her) is the cause of her name Batul. Some say that it was because, ‘Due to her distinguished personality compared to the women of her time with respect to her virtues, religiousness, and qualities’. However, there is another possibility, which is loftier than the rest, i.e. “it is said that it was because the identity of Lady Zahra (peace be upon her) was such that she had detached herself from the world and become attached to God alone. Indeed, Lady Zahra (sa) is a great example of someone who defended the truth and Wilayah, and the lifestyle of Her Holiness, especially her servitude, piety, God-wariness, abstinence of the world, asceticism, her life as a wife, her way of nurturing the children, is ideal and role-model for everyone.

The responsibility of religious seminaries

Nevertheless, I am hopeful that we do not fall short in invoking the blessings of the Prophet’s household (peace be upon him) and from seeking their teachings and associating ourselves to their school of thought which has all that we desire with respect to the cognition of Allah and the Imam, and that we can benefit from the treasures of this house of ethics, knowledge and training, especially in today’s time and conditions where the world is willing to listen to these points and truths. However, the greater responsibility in the regard is of the clerics, scholars and students of the religious seminaries, to introduce to the world the institution of Ahl al-Bayt (peace be upon them), and its treasure of knowledge, i.e. the Holy Qur’an, Nahj al-Balagha, Sahifa Thalitha, Sahifa Rabia and other supplications that have reached us, as we are the richest of all nations in knowledge and wisdom.