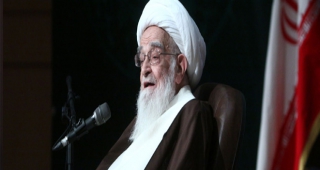 The Message of His Highness Grand Ayatollah Saafi Golpyagani for the ninth international convention on His Holiness Imam Sajjad (peace be upon him) – Hormozgan – Moharram Al-Haram 1441 Hijri.

In the name of Allah, the All-Beneficent, All-merciful.

All praise belongs to Allah, Lord of all the worlds. Mercy and peace be upon the greatest of all the prophets and the apostles, the beloved of the Lord of the worlds, Abil Qasim Mohammad and his pure progeny, especially the Remainder from Allah on the Earths – May Allah hasten his relief.

With greetings and due respect for the honorable attendees, the devotees and the lovers of the holy Progeny of the Prophet (peace be upon them), who have attended this heavenly and devotional convention conducted for the purpose of honoring, revering and seeking medium to the divine court of His Holiness Imam Zain Al-Abideen Al-Sajjad (peace be upon him). I beseech Allah (s.w.t.) for pouring His blessings and bounties on everyone.

His Holiness Imam Sajjad (a.s.), for his moral values, praiseworthy virtues, heavenly qualities, and the greatness of his positions and statuses, has been praised and revered by the entire nation. His Holiness was known for his knowledge, cognition, faith, prayers and other excellent virtues.

Indeed, everyone accepted the lofty position of His Holiness Imam Ali ibn Al-Husain (peace be upon him), and there is definitely no one who would doubt the virtue and excellence of this honorable Imam.

One of the miracles of His Holiness Imam Sajjad (peace and blessings be upon him) is the invaluable and unparalleled Sahifa Al-Sajjadiya; it is a book that has left the human intellect in astonishment for fourteen centuries and has made them accept their incapability in the case of its true understanding and comprehension; a book that is filled with monotheistic teachings, cognitive realities and superior human qualities and moral values, and it has taught mankind the way of discourse with the creator of the universe and the way of expressing servitude, humility and humbleness in the divine threshold, and at the same time, it also depicts humans as extremely small and worthless in front of the Creator of this endless universe and His creation, and it takes the horizon of human thought and perception to the highest level of excellence, advancement and progress.

His Holiness Zain Al-Abideen, Sayyid Al-Sajideen, Ali ibn Al-Hussain (peace and blessing be upon him), is truly unique in this field and the entire Islamic nation feels proud in front of the entire world for possessing a book like Sahifa Al-Sajjadiya.

Humanity has obtained immense success and progress in the case of material sciences today and they keep conquering the highest peaks of science and knowledge day by day, but a reality has been lost and ignored amidst this process and it is the reality without which the human lives will be overcome by meaninglessness and hollowness, astonishment and wandering.

Who can show us this lost reality? Can someone apart from those who are connected to the unseen world and who have gained cognition of the reality of the universe, show us the excellence of the eternal life?

Therefore, when a man finds himself in front of this great book, the book of cognition and understanding the realities, he must express gratitude to the God Almighty with all his existence for being able to have access to such sublime teachings with the help of this honorable Imam.

At the end, we must confess and accept the fact that we are too small to speak about the great personality of His Holiness and the holy book, Al-Sahifa Al-Sajjadiya, and we beseech Allah (s.w.t.) to bless us with the true understanding of the enlightening teachings of His Holiness and the great heavenly treasure he has given us in the form of a book, so that we can follow and apply some of the teachings in our lives and set them as our goals and examples for today’s society.

I would like to express my sincere gratitude towards all the honorable attendees of this glorious seminar and towards the honorable organizers, and I request Allah (s.w.t.) to bless them with the special attention and focus of His Holiness, the great Remainder of Allah (s.w.t), Imam Mahdi (may Allah hasten his reappearance).

Peace and mercy of Allah (s.w.t.) be on all of you